Art Objects as a Space for Sensus Communis

The aim of this paper is to argue for an aesthetic theory that resolves disagreements in aesthetic judgments by grounding them within the space of an art object. It will be argued how the object-subject relation that occurs within the space of a literalist art object, creates a ‘ground’ on which the multiplicity of aesthetic judgments of a sensus communis can finally come to proximate agreement. This mandate for agreement is an important one; as Kant states in his Critque of Judgment:

In all judgements by which we describe anything as beautiful, we allow no one to be of another opinion; without however grounding our judgement on concepts but only on our feeling, which we therefore place at its basis not as a private, but as a communal feeling. Now this common sense cannot be grounded on experience; for it aims at justifying judgements which contain an ought. It does not say that every one will agree with my judgement, but that he ought.1

In the quote above, Kant outlines the preconditions in which the notion of a “universally shared faculty of agreeing”2 can be enacted in the multiplicity of its beholders. However, even though the task of sensus communis is to unify aesthetic tastes, the prevailing challenge with such a task is that it cannot be solved by merely imposing an ‘objectivity of taste’.3 Kant states that a ground on which aesthetic tastes becomes grounded, can exist, but unlike the faculty of Reason, the principles of Judgment cannot be formulated or stated as an a priori—it is something that needs to be resolved and emerge in the multiplicity of subjects who ‘work out’ their individual faculties of judgment within the unity of a sensus communis.

However, the question that is posed by what de Duve refers to as the “Kant after Duchamp approach,” is whether it is even practical for a multiplicity of individuals to arrive at a stage of agreement. An even more fundamental question that implies on the impracticality of a sensus communis, is raised by Kant: are we capable of living in peace?4 This is a moral, an existential, and a political question; as much as it is an aesthetic one. But the challenge does not stop there, especially in de Duve’s “Kant after Duchamp” art discourse; where the ‘is this beautiful’ question becomes substituted by ‘is this art’ question: Modern art not only demands an answer to whether something is beautiful or not, but also whether the artwork should be considered an artwork as such.—It is a question with immense moral connotations; if one may choose to deprive an object of its status as an art piece, then one may also choose to not account the humanity of a person.

As demonstrated, the implications behind ‘Kant after Duchamp’ theories can be very significant; it becomes an ought to establish an art theory that does not engage in the dangers of questioning ‘what is art’ and ‘what is not art’, and instead, offer an aesthetic theory that compels individuals to agree, but does not force them.—As the latin phrase that supports the latter point; about tastes, it should not be disputed.5 My aim here, is not to venture and add another drop of water into an endless bucket6 of Kantian metaphysics and morality, but provide a possibility for unifying the multiplicity of judging faculties within a space that surrounds an art object, as was theoretically demonstrated in Donald Judd’s Specific Objects, Fried’s critique of Judd in his Art and Objecthood; and viewing these theories through the lense of Theirry de Duve’s Do Artists Speak on Behalf of All of Us.

Before proceeding in defining the principle on which a sensus communis may be established, I will first expound the relation that occurs on an individual level: between the beholder (the subject) and an object (the art object; painting, sculpture, etc.), and how a refiguring of the surrounding space occurs out of this subject-object relation. The manner in which the subject confronts an object, is usually a one-way relationship: where the subject projects her faculties of judgment onto an art object as a spectator who judges a work as a theatrical subject-matter.

With the development of what Fried calls literalist art; which transformed the preconception that the object is distanced and isolated from the beholder, and the expectation that the art object is an entity separated from the viewer—or what Fried calls ‘objecthood’—was put under question; challenging the art formalities that were prevalent at the time. With the advent of literalist art, the beholder is no longer distanced from the object as if the object were a theatrical subject-mater; but instead, the beholder is placed along with the object. Thus, the beholder becomes part of the theatrical space in which the object is positioned. For Fried, this means that the presence of an object is no longer its ‘objecthood,’ but also the space which the object occupies; for Kant, the object is no longer an object, but also the ground that it surrounds.7 It is within this newly formed ground on which I want to demonstrate how a multiplicity of tastes can come to a more proximate state of agreement.

The determination of the literalist artwork is to unify the beholder and the object in a commons space, but a reliance on formalities and predefined bounds of a medium, tends to exhaust the ways in which subject-matter can be represented. In literalist art, the beholder becomes the protagonist-shape, just like a square becomes a protagonist in Minimalist painting. This means that not only is the beholder ‘pulled’ into a space that she shares with the object, but whose judgment about the art object also becomes grounded within the object itself. If one where to deny the art status of an object, one would only do so as a ‘shape’ within the object, and not as an outsider spectator who casually decides to obliterate the object of its art status. This is a crucial function for establishing a ground of the sensus communis as it creates a space surrounding the object in which the multiplicity of individuals can attempt to resolve their tastes, without denouncing the art object.

Fried goes a step further in his claims by explicitly stating that in literalist and Minimalist art; the beholder and the object, both become a unified part of a particular situation. As apposed to emphasizing on the process of ‘working out’ the subject-matter within the medium of that object, the beholder’s taste becomes part of art object itself. In Kant’s notions, “our faculty of judging a priori according to principles, would be incomplete, if the Judgement, which as a cognitive faculty also makes claim to such principles, were not treated as a particular part of it”.8 The judgment of a beholder must therefore become part of the art object; the a priori in this case, is an inherent quality of the object that we ascribe to some formal principles; such as the art’s medium, style, character, etc., or what Kant refers to as ‘precepts.’ But this form of categorizing the artwork would remain incomplete if we were to dismiss our own aesthetic Judgment of the artwork—as a constituent part of the artwork.

It is therefore a Kantian ought of the beholder to nurture her own faculties of judgment as a necessary precondition before she can claim that other beholders ought to agree with her judgment. This precondition requires the beholder to absorb the object into her subjectivity, and also for her subjectivity to be absorbed into the object. As Fried argues, the particular situation in which the beholder confronts an object, by definition, must place the beholder into the space that the object is in.9 The surrounding space in which the object is placed, also influences the terms according to which the subject-object resolution takes place: for example, as Fried remarks on Morris’s theory, the size of the art piece should have a scale that is somewhere between a monument and a handheld-able object; because a monument creates a space that distances it away from the viewer, but a handheld-able object on the other hand, does not posses the capacity necessary for spatially transforming its surroundings. A middle ground within this spectrum of scale therefore must be found for what Fried refers to as literalist artwork.

One of the artists that Donald Judd mentions10 is Claes Oldenburg who is known for creating sculptures that resemble everyday objects, albeit in exaggerated scales. One of these examples includes Spoonbridge and Cherry (1985) which is what Judd refers to as a unique ‘shape’ whose constituents are individual, nonspecific ‘anthropomorphic’ shapes. But the sculpture itself is what Fried would call a unique as a whole—and must be considered as such, without it being reduced to its constituent parts. By creating sculptural objects that consist of ice-scream cones, spoons, cherry’s, etc.—Oldenburg not only creates an object that a subject can easily recognize and relate to, but also an object upon which a common agreement of subjects can be grounded. By having an easily agreeable object in common, the subjects can more easily resolve and ‘work out’ the differences in their aesthetic judgments—all without relying on formalities, or what Kant calls ‘precepts’ that are usually put in place outside the realm of the artwork. 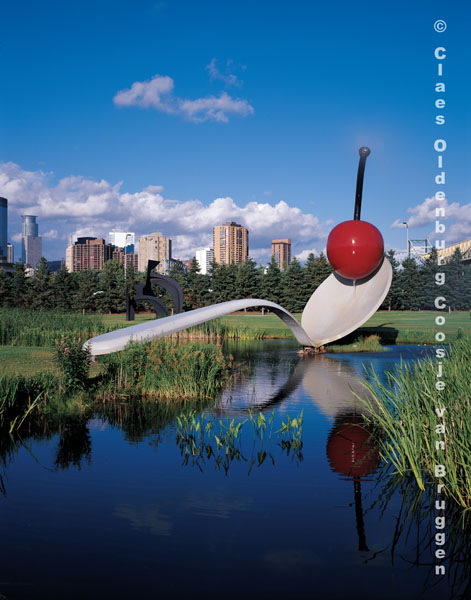 Judd mentions how Claes Oldenburg tends to implicitly avoid objects that resemble trees and persons, perhaps because these figures are not anthropomorphized and commodified to the same extents as cherries, which originate from the same realm of nature, just like their tree cousins; but in cultural practice, trees and cherries are anthropomorphized in completely different manners. This contrast is necessary, because not only does Spoonbridge and Cherry consists of ‘shapes’ that the beholder can recognize, it also attempts to negate the ground on which the sculpture is positioned. The city park in which the sculpture is located, becomes confronted by the presence of the sculpture, creating a space, or a ‘ground’ that would not exist if the sculpture were to not confront the park in the first place. The space in which the object confronts its surroundings creates a negation of space in which the beholder can dissolve into the object, understand it, and aesthetically judge it. This space is what Danto calls “a kind of ontological vacation place” in which the multiplicity of aesthetic judgments can attempt to find an agreement.11

In the circumstances in which a group of subjects can have a common space in which every beholder can have an internal dialogue with an object in a public space; the formation of sensus communis finally becomes possible, where all individual judging subjects are ought to agree with the faculty of judgment of one another. This occurs when Thierry de Duve makes an emphasis on the fact that disagreements in judgment must not necessarily be solved with an ‘objectivity of taste’,3 but instead, according to Judd, within the three dimensions that surround an artwork.12 In these circumstances, the judgment of many subjects ascends to a common universality, a multiplicity of sensus communis under a commonly shared object.

Theirry de Duve, “Do Artists Speak on Behalf of All of Us.” The life and death of images ethics and aesthetics, edited by Costello, Diarmuid, and Dominic Willsdon. Cornell University Press, 2008, pp. 140-156.