Museum Visit I: Beuckelaer's Fish Market as an Art Object

In one of his series of paintings called Four Elements: Water (1569), Beuckelaer depicts a scene of a market that represents twelve kinds of wish that are clearly dead and which ostensibly represent the twelve disciples of Jesus. Other Beuckelaer paintings such as the Slaughtered Pig (1563), is a quite realistic depiction of flesh in a pig’s cut open belly.

One of the paintings from Beuckelaer’s Four Elements series which represents the twelve disciples of Jesus. Located at The National Gallery, London. Beuckelaer’s Fish Market (1568), which is a very recent acquisition by Metropolitan Museum of Art, is the painting chosen to be subjected to examination according to Hegel’s introductory notes of his Lectures on Aesthetics.1

The theme of this examination is the manner in which the artwork is an apprehension of man’s senses, and how it is drawn from the sensuous sphere.2 It is necessary to pinpoint art as something that is produced for apprehension by man’s senses and its derivation from the sensuous sphere. The task of artwork is therefore to embrace a spirit intended for subject apprehension and feature an aspect of “abstract individual subjectivity”.3 The Feeling of an artwork thus remains a purely subjective emotional state of the mind in which the concrete (such as morality, justice, etc.) vanishes and becomes a product with its own sensuous sphere contracted into the greatest abstraction.4 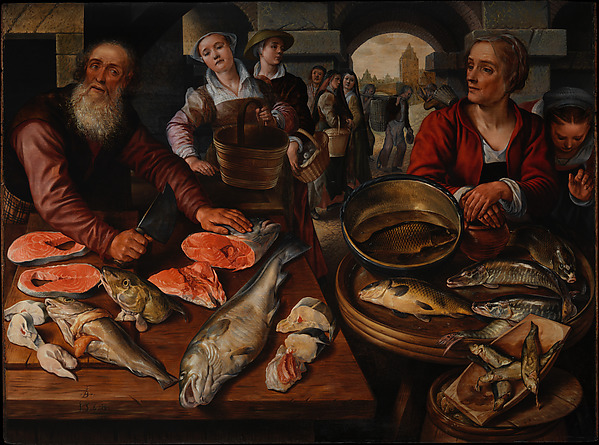 The painting itself features a very detailed depiction of dead fish as the subject-matter, as well as a bounty from land and sea that was becoming available to the developing local markets. As Hegel states that “by mere imitation, art cannot stand in competition with nature”5, for when the “principle of imitation is purely formal, objective beauty itself disappears when this principle is made the end of art”.6 If such becomes the aim of art, then the correctness of the imitation is the sole question that remains, and not what is supposed to be imitated.

The Fish Market should therefore be examined not just as a mere imitation of a market scene; a sensuous apprehension which Hegel describes as “the poorest mode of apprehension, the least adequate to spirit”,7 nor should it be examined according to the subject-matter’s “purely theoretical relation to intelligence”,8 but the examination shall occur according to Hegel’s science of art; the middle between sensuous interpretation and ideal thought.9 In this manner the sensuous is liberated from its “material scaffolding”.

To perceive the sensuous or the spirit of the painting, namely, the relation between the crowd as subjects and the fishes as objects, attributes that are beyond sensuous must be considered. For example, when taking into consideration what is perhaps the most sense driven quality of the objects, namely, the fish smell, it is a requirement to go beyond these sensuous qualities. Smell, taste, and touch must be excluded from the enjoyment of art, and only sight and hearing remain adequate for the task.9